This article is also posted on SatyaVijayi

Siddharth Vardarajan, Editor of The Wire and his wife Nandini Sundar. Both of them have been at the forefront, leading the protest against HECI

Marred by controversies, Higher Education Commission of India( HECI), deserves a fair trial and this article is an attempt at the same.

On September 4th, AIDSO (All India Democratic Student’s Organisation), a student’s organization affiliated to communists, plans to carry out a protest at Ministry of Human resource development (MHRD), against the newly introduced education reforms by the central government.

“BJP and RSS desires greater control over the functioning of educational institutes across the country, and ergo has brought about the overarching strategy of ‘graded autonomy’ to universities.”

In an attempt to reinvigorate the higher education in India, the HRD ministry had recently introduced a draft Bill, proposing the formation of a new regulatory body — Higher Education Commission of Indian (HECI) to replace the University Grants Commission (UGC). Many experts have heralded HECI as the great hope for redemption of universities in India while others have an opinion contrary to this.

Out of the many accusations levelled at government’s recommendations, granting autonomy to universities has got the most rebarbative responses.

“Autonomy is an eyewash, under guise of autonomy from regulations, there will be no check on the quality and adequacy of, leading to an inevitable and certain fall in overall standards of all institutions”, or so says a JNU professor.

According to experts, HECI will specify norms and standards to establish, commence academic operations of an HEI, using an online e-governance module. Since public will be able to access all the necessary information on the website of the HEI, a complete picture will be available to everyone pursuing higher education, and ergo this erases doubt regarding the system’s transparency. Website will also have a provision to make a complaint. UGC on many occasions has been accused of carrying out an inspection Raj, wherein it intimidated and impinged upon the rights of varsities to function sans any fear. Since UGC had a control over the funds, it also had the power to incentivize obedient performers. But now the government has decided to allow HECI to flex its pecs by allowing HECI to close the shop of non-compliers and if need be, get them jailed. So it is vacuous to assume that such a system is being brought by the government to cloud the collective decision taking capability of youth. 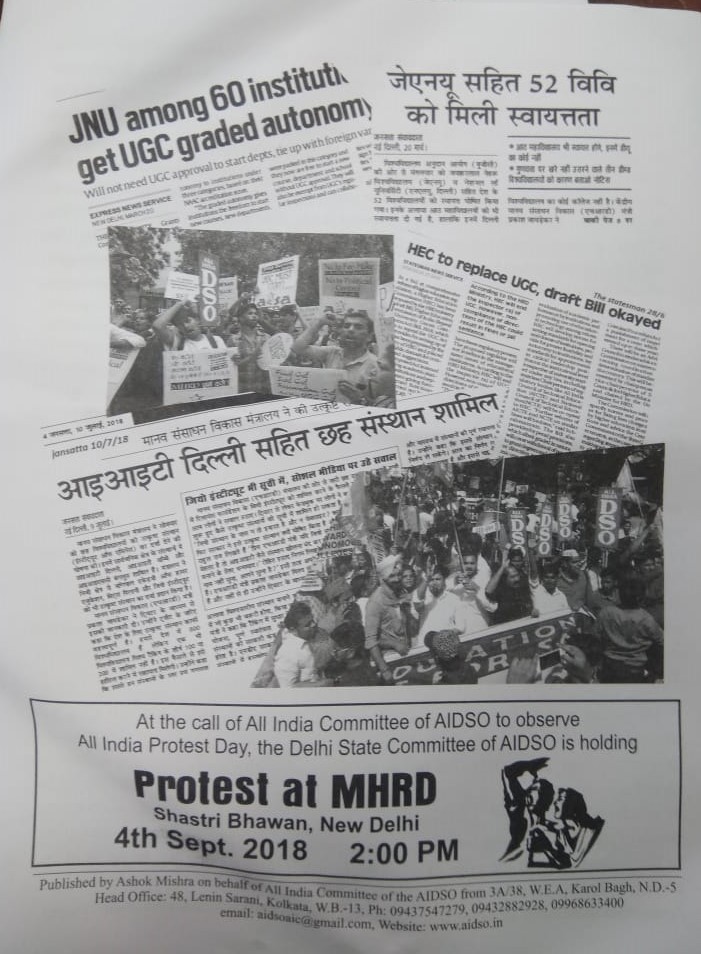 The educational reforms recommended by the government appear to have no dearth of opposition, especially by the communists. Nandini Sundar,a sociologist professor at University of Delhi, wife of former editor of The Hindu, Siddharth Vardarajan, had opined in NewYork Times that Modi’s “Hindu nationalist government” wants to cripple the universities, and force the students to study Vedic Hindu Texts. Ms Sundar’s temerity can be better understood if her “body of work” is taken into consideration. She has been associated with promoting Maoist activities in the red corridor of India, and has been charged with the murder of a Tribal who protested against Maoists.

Ms Nandini Sundar’s words as printed in The NewYork Times

What makes one suspect this protest as a well planned malicious propaganda against the Modi government is the fact that the pamplet handed out to the students and the words in the article written by Ms Nadini Sundar, scoff at RSS and BJP.

Pamplet distributed to the students in DU

Among the reforms which government plans to bring about, the most commendable one is bringing the head of all state councils for higher education, as its members. So far states had a very minuscule role to play in in the formulation of higher education policy, despite the fact that 70 per cent of the universities in India are state universities, and 90 per cent colleges are under state governments. The government also plans to grade the universities, but the recommendation has not gone down well with many. It is on the basis of the grade that each university is awarded, that it will be allowed to fix its fees. The picture below gives a gist of  the different categories:

Government has also decided to award Institution of Eminence (IoE) to six educational institutes- IIT-Delhi, IIT-Bombay, Indian Institute of Science (IISc), BITS-Pilani, Manipal Academy of High Education and Reliance foundation’s Jio institute. This has again earned the government ire of many, as Jio Institute is yet to be functional. But government in its defense has said that Jio institute found its name in IoE list under the greenfield category, for new or proposed institutions.

The restructuring and reforms that the government plans to bring about, has its downside, as HECI is not perfect; RSS-affiliated student wing, Akhil Bharatiya Vidyarthi Parishad (ABVP) has also raised it concerns.

Without an iota of doubt, Modi’s government will have to do elbow grease, to bring a progressive and far-reaching reform. But it’s the communist’s narrative and incessant attack on a particular section of the society, repeatedly, under the guise of freedom of speech and expression, that needs to be scrutinized. Assiduously attempting to slander the government could be a possible ploy to mislead the youth and to gain greater control over their thought process. The onus is on Communists to come out clear on this.